Since 1991, Les Talens Lyriques have been performing, protecting and sharing music from the early Baroque to the early Romantic period. Founded by harpsichordist and conductor Christophe Rousset, the ensemble takes its name from Rameau's opera “Les Fêtes d'Hébé”. Whether they are performing the master works of music history or shedding light on rarer or unpublished scores, Les Talens Lyriques have taken an essential place in the French musical landscape. In 1994, the ensemble produced the soundtrack to Gérard Corbiau's film “Farinelli”, which sold over a million copies.

This success marked the beginning of a discography that today includes some sixty releases, the most emblematic of which are Pergolesi's “Stabat Mater” (1999), Mozart's “Mitridate” (1999), numerous operas by Rameau, Gluck, Salieri and Traetta, and the series of “Tragédiennes” with the soprano Véronique Gens. In 2001, the Ensemble also embarked on a Lully cycle, which is still in progress, and which now includes seven titles (“Persée”, “Roland”, “Bellérophon”, “Phaeton”, “Armide”, “Alceste” and “Isis”), all of which have been highly successful in both critical and media terms. Since 2019, they have dedicated albums to Gounod, Pergolesi, Couperin, Mozart and recorded a rarity: “Armida” by Antonio Salieri. In 2001, Les Talens Lyriques won the Victoire de la Musique award in the “Best Ensemble” category.  Since its foundation, Les Talens Lyriques has been involved in educational activities for school children. In 2016, Les Talens Lyriques team created three applications to facilitate musical discovery: t@lenschool won the Musical Education prize awarded by the Chambre syndicale des éditeurs de musique de France in 2017 as well as the Public Prize and the Jury Prize in the “Social Impact” category awarded by News Tank Culture. In 2018, t@lenschool received the Innovation Award at Classical:NEXT.

We have supported Les Talens Lyriques since January 2019. 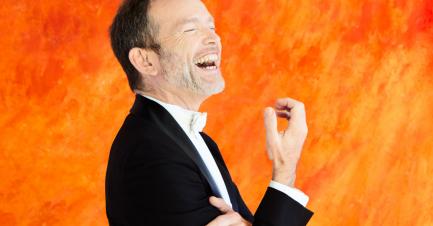 Interview of the conductor Christophe Rousset